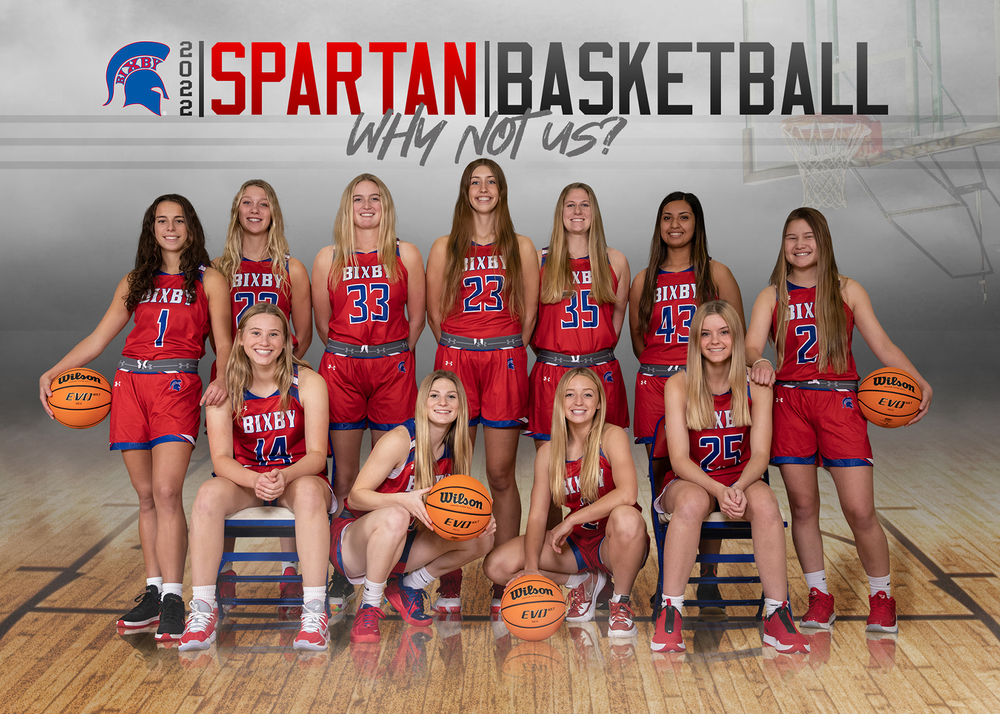 The Lady Spartans, ranked second in the Oklahoma Secondary Schools Activities Association’s preseason poll, will be busy the remainder of opening week as they host the annual Bixby Girls Invitational Basketball Tournament, Thursday through Saturday (Feb. 9-11).

Senior guard and team leader Kate Bradley is the lone starter lost to graduation. Despite entering this season with four returning starters, the Lady Spartans are a young team with only one senior – 5-10 center Haley Prince – on the varsity roster.

The four returnees – junior guards Gentry Baldwin and Gracy Wernli and junior post players Meredith Mayes and Alyssa Nielsen – are talented, experienced players who saw varsity starting time as freshmen. The four starters, along with other varsity players, worked hard during the summer and preseason to improve individually and as a team. Their progression hasn’t gone unnoticed.

“They, along with several of their teammates, are the hardest working group that I have had the pleasure to coach,” said coach Thomas, who became the Lady Spartans’ head coach in 2015-16. “They each made our 10,000-shot club this summer, played a ton of summer ball and spent countless extra time shooting and working on skill development to be the best they can be.

“To say it is a joy to coach this group would be an understatement,” she added.

The 5-6 Baldwin, who will handle point guard duties, averaged 8.8 points a game along with 3.2 rebounds, 4.2 assists and 1.6 steals for BHS last season. Wernli, a 5-9 guard, averaged 13.7 points, 1.6 assists and 1.7 steals per outing last season while being a deadly three-point shooter.

Mayes, a 6-3 forward, averaged a double-double last season, averaging 10.6 points a game and 10 rebounds an outing. Nielsen, a 5-11 forward, contributed 9.5 points and 5.4 rebounds a game last season, along with 2.3 assists per game.

Despite illness and injury in the preseason, Bixby’s girls are eager to tip off this season, which features another challenging schedule.

“We have had three girls out due to injury or illness during our last three scrimmages. I was also out due to illness,” coach Thomas said. “Coach (Kristin) Atkinson did a fabulous job progressing the team and coaching solo. She and coach (Corbin) Burchett are valuable assets to the program.

“We competed hard and gained some valuable experience and court time for our bench and role players. We are ready to go next week.”

Edmond North, which returns a strong nucleus from last season, was given the top-ranking in the OSSAA’s Class 6A girls’ poll. The remainder of the top five ranked teams, in order, included Bixby, Norman, Choctaw and Union.

“I’m not big on preseason rankings. Yes, it’s nice to have the respect for your program and players but it also makes other teams really gun for you,” Thomas noted. “We will approach this season as all others. We will strive for excellence each day, compete hard and give 100 percent each opportunity we have to play.

“The results – wins - are a byproduct of doing things the right way. Experience is always a great advantage to have at clutch time.”

Bixby’s tournament features some of the top girls’ teams in the state, including Class 6A’s Edmond North, No. 10 Edmond Memorial and No. 14 Broken Arrow along with Class 5A’s top-ranked Sapulpa and No. 10 Tulsa Will Rogers. Putnam City and Class 4A’s No. 15 Harding Charter are other tourney participants.

NOTEBOOK – Bixby competes in the Girls Tournament of Champions, Dec. 27-29, at the BOK Center and is scheduled to play in the Putnam City Invitational, Jan. 6-8, 2022. Also competing in the TOC are Norman, Tahlequah, Classen SAS, Holland Hall, Lincoln Christian, Howe and Seiling. … Under coach Thomas, Bixby has played in two Class 6A state tournaments – 2021 and 2018. In 2018, the Lady Spartans fell to eventual state runner-up Putnam City West, 49-41, in a state quarterfinal game. … Kate Bradley, a 5-8 freshman guard at Oklahoma Christian University, earned a starting spot and is the Lady Eagles’ second leading scorer early this season.