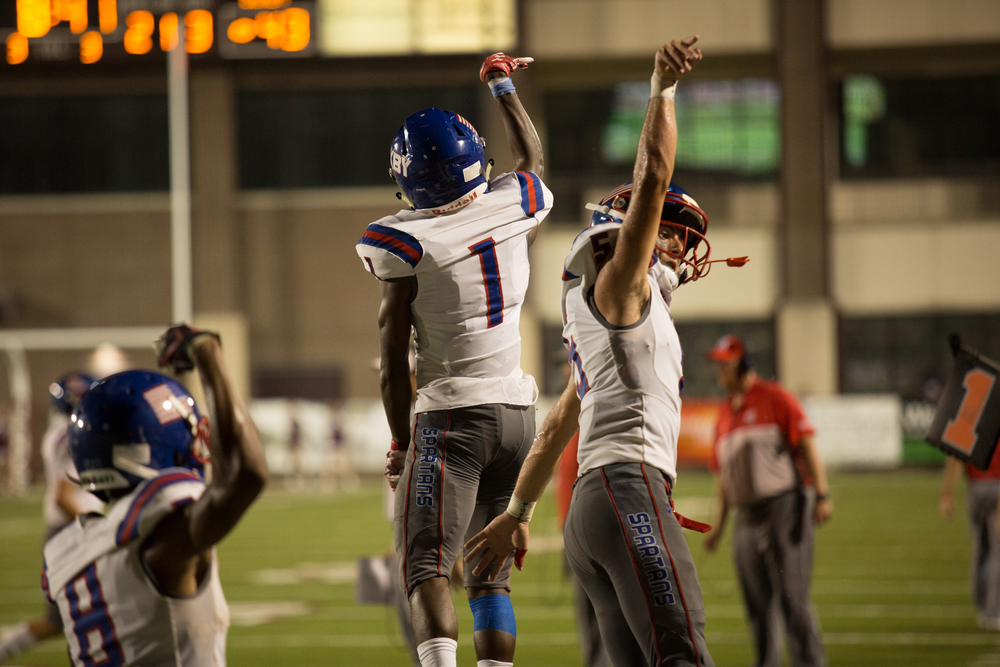 Kickoff at Bixby’s Lee Snider Stadium is set for 7 p.m. BHS will honor veterans during its annual  Military Appreciation Night prior to kickoff.

Since the start of the Border Wars featuring teams from Mansfield against Tulsa area teams began in  2018, Bixby and Timberview have been involved in high-scoring, entertaining games. Bixby rallied past the Wolves, 36-33, at home in 2018 and romped to a 77-44 road victory in 2019. The scheduled 2020  game between the two squads was canceled because of coronavirus concerns.

The season opener has the potential to be another high-scoring, entertaining game as both teams are coming off successful seasons and both teams feature Division I-quality talent.

Bixby, led by 12th-year head coach Loren Montgomery, was 11-0 last season culminating with a 17-14  victory over Choctaw in the Class 6AII state title game at the University of Central Oklahoma’s Wantland  Stadium in Edmond.

Timberview, coached by James Brown, was 11-2 last year in the state’s Class 5A-Division 2, advancing to the regional semifinals of the state playoffs. The Wolves defeated Dallas Kimball (49-7) and Ennis (42- 28) before being ousted by Lovejoy (64-50).

Mansfield averaged 40.8 points per game while allowing 24.3 points an outing. Timberview was the No.  64-ranked team in Texas last season.

Leading the Wolves is Landon Hullaby, a 6-0, 185-pound senior safety, who has committed to Oregon.  Hullaby, the No. 62 ranked player in Texas according to 247Sports, is the younger brother of Jaden  Hullaby, a 6-2, 223-pound redshirt freshman linebacker at the University of Texas. Jaden played against  Bixby in 2019.

“I think Mansfield graduated 35 guys. They’ll have some new faces, but they’ll be talented and have a  bunch of Division I players,” Coach Montgomery said. “I think they’ve had some move-ins too. They’ll  be a challenge again.”

After having summer workouts limited in 2020, Bixby returned to a more normal summer routine this summer, including weightlifting, team camps, and 7-on-7 passing league competition. “The summer went really well … we got a lot of work in this summer,” coach Montgomery noted.

The summer success and a positive showing in last week’s Bixby Fall Classic scrimmages – featuring a  20-6 half-game win over Broken Arrow and 35-14 win over Sallisaw – Montgomery believes the  Spartans are prepared to start the season after a quality week of practice.

Bixby has talented returnees from last year’s undefeated squad, including tailback Braylin Presley, the state’s top player in 2020. The 5-10, 165-pound Presley, an Oklahoma State commitment, rushed for  2,767 yards and scored 35 touchdowns last season. The past two seasons, he’s rushed for 3,130 yards and  46 rushing TDs while catching 79 passes for 948 career yards and 16 TDs.

Jersey Robb (5-10, 205-pound junior) and Zack Blankenship (5-5, 155-pound senior) will also see time carrying the ball as well as playing on the offensive side.

Missing from Bixby’s offensive attack this season is starting quarterback Mason Williams, who guided the Spartans to three state championships during his tenure. Expected to take over at quarterback is  Christian Burke, a 5-10, 176-pound senior who saw playing time in a back-up role in 2020.

“I think we’re closer to being better offensively,” coach Montgomery said after the recent scrimmages. “Obviously we’ve got to get a little better and hit some of the passes we had open, but I think that will come the more games we get under our belts and more experience by our quarterback. “We’ve got a good supporting cast with some playmakers who will help the quarterbacks. I was pleased with what I saw from the quarterbacks. I saw some real bright spots from several players during the two nights  we had scrimmages … guys we maybe hadn’t anticipated being playmakers.”

Defensively, Bixby has talented players returning. Senior linebackers Jack Puckett (6-1, 220 pounds) and  Beau Bertelli (6-1, 200-pound), who each had crucial plays late to preserve the title game win over  Choctaw, return along with standout defensive backs Dylan Hasz (5-10, 177-pound junior) and Jakeb  Snyder (5-9, 170-pound junior). D. Hasz and Snyder will also contribute offensively as receivers. “Defensively, I feel like we’ve got some real good players,” Montgomery added. “We’re running around a lot and are physical. but we’ve got to grow up a little on the defensive line.”

NOTABLES – Bixby is riding a 36-game winning streak entering the season opener and the Spartans have captured three straight Class 6AII state championships and six state titles in the past seven seasons.  Bixby’s 36 consecutive wins is tied for ninth in MaxPreps list of longest active football win streaks.  Caledonia, Minnesota tops the nation with 71 consecutive victories. … This will be Bixby’s last season in Class 6AII as the Spartans move to Class 6AI next season. … During his tenure at Bixby, Coach  Montgomery-led teams have compiled an overall record of 94-37 with a 20-3 state playoff record. …  MaxPreps ranks Bixby as the state’s top team while ranking the Spartans No. 27 nationally. MaxPreps also named Bixby running back Braylin Presley to the first team offense on its’ 2021 Preseason All America team. …Connor Nolan (5-11, 161-pound senior) returns as the Spartans’ kicker and punter after a productive junior season. He converted 66 of 67 extra-point kicks and averaged 37.3 yards per punt. ---