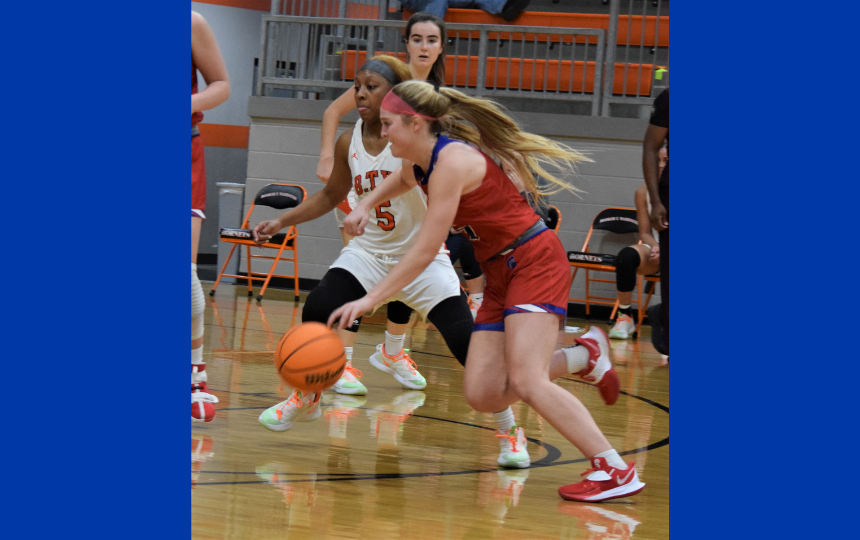 Despite facing a tenacious defensive effort by the Lady Hornets, Bixby never trailed in the Frontier Valley Conference game but was not able to separate from the hosts until early in the second half in capturing a 56-41 victory.

Bixby improved to 11-4 on the season, rolling to its sixth victory in the past seven games. The Lady Hornets dipped to 5-3. Bixby featured another balanced attack with four players scoring in double figures, led by sophomore post Meredith Mayes’ 13 points and 19 rebounds.

“They (Booker T.) have that explosiveness on defense. I was proud of the girls’ effort tonight effort … it wasn’t the prettiest game,” Tina Thomas, Bixby’s head coach, said afterward. “There were times in the second half where I felt like we played defense forever. These kids are so cool …  you give them a goal, an objective, and they will do whatever it takes to make that happen for the team.”

Mayes opened the game with a rare three-pointer before two treys and a drive by senior Kate Bradley and a three-pointer by sophomore Gentry Baldwin lifted the Lady Spartans to a 14-11 first period lead.

Two jump shots by sophomore Alyssa Nielsen and two free throws by Mayes allowed Bixby to cling to a 22-21 lead before the Lady Spartans scored six straight points to hold a 28-21 halftime lead.

Baldwin hit a jumper and a free throw before Bradley, receiving an assist from sophomore Lexi Eaves, drained a three-pointer with one second left for the seven-point lead at intermission. “Lexi came in and filled her role. She goes in there and makes a big assist for the buzzer beater,” coach Thomas said.

Leading 29-23 early in the third period, Bixby made its move as Mayes scored on a rebound put-back, Gracy Wernli, scoreless in the first half, banked in a three-pointer and Nielsen sank a turnaround jumper for a 36-25 lead with 4:42 left in the third period.

Field goals by Nielsen and Wernli gave BHS a 40-27 lead before the Lady Hornets used a three-point bucket by Aunisty Smith and a layup by Carrigan Hill to narrow the gap to 40-32 with 2:08 showing before Wernli scored off a rebound and Bradley again hit a three-pointer with six seconds left for a 45-32 lead entering the fourth quarter.

Bixby kept applying the pressure as Mayes scored from in-close after an assist from Nielsen and Wernli converted a conventional three-point play increasing the Lady Spartans’ lead to 50-32 midway through the final quarter.

Four points by Mayes and a jumper by Nielsen gave Bixby a 20-point lead (56-36) before the Lady Hornets scored the final five points of the game on a three-pointer by Sai Johnson and a drive by Haylee Mitchell.

Bradley led Bixby in scoring with 14 points, followed by Mayes with 13, Wernli with 11, Nielsen 10 and Baldwin eight. Hill and Mitchell each scored 12 points to pace Booker T.